Cyprus: the state of affairs (1) 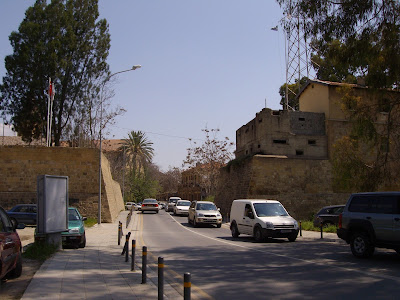 The Green Line, the UN buffer zone that splits Nicosia, the only segregated city in Europe, in two is quite a bit older than the Berlin Wall, which fell after twenty eight years. The Green Line already celebrated its forty-second birthday. It seems as if in the meantime another, temporary, barrier has emerged. On the edge of the historic centre, which lies within the ramparts built by the Venetians, work is going on to reconstruct the Platia Elefteria, the square which gives access to the famous Ledrastreet, leading to a checkpoint through which you are able to go the northern part of the city where the Turkish Cypriots rule. For years, it was virtually impossible for Cypriots to cross the Green Line, but that did change in 2003. Today, there are quite a few Turkish Cypriots working in the free area, as the part of Cyprus not conquered after the Turkish invasion in 1974, is called by the Greek Cypriots. The North calls itself "Turkish Republic of Northern Cyprus", a country that has been recognised only by Turkey, which has deployed an army of nearly forty thousand men in the area. It is in fact the only territory of an EU member state which is occupied by another country. 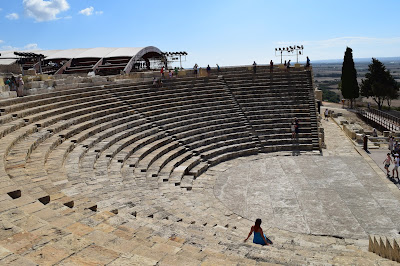 The huge building site proves that the reconstruction of the square is tackled on a grande scale. Something you would not expect in a country that has been hit hard by the euro crisis. For a long time Cyprus balanced on the brink of bankruptcy. For too long, according to Dr. Andreas Charalambous, the man responsible for maintaining financial stability at the Ministry of Finance. According to him, the government in office at the time the crisis broke out waited too long to ask for emergency aid, due to a number of reasons. The most important of them an imbalance in the real estate market, and particularly the high proportion of Greek sovereign debt in which Cypriot banks were involved. By waiting too long to ask for aid, the financial situation worsened unnecessarily, which eventually led to a "shock therapy". Savers and depositors lost a large part of their assets above a limit of one hundred thousand euros to save the country from bankruptcy. Cyprus also had to subject itself to the regime of a "troika" of the IMF and the EU, in return for financial aid, which meant cuts on spending and a consequent rise in unemployment.

With the images of the havoc the crisis causes in Greece on my mind, the bustling activity in Nicosia is surprising. Yes, there are empty shops and during my stay I have also seen one elderly woman begging, but you do not see streets with almost nothing but empty commercial properties and the poverty and deterioration noticeable in some areas of Athens is absent. Dr. Charalambous explains that the aid programme has now come to an end, that Cyprus is able to borrow from the financial markets again and that the country is trying to attract new investors. In the last quarter of 2015, some economic growth already returned. The government, he remarks, strictly implemented the measures demanded by the troika. It was also important that there was hardly any violent opposition or social unrest, like in Greece. Work is underway to strengthen the position of banks and prudent handling of public finances remains necessary because, although there is economic growth again, the country is not yet out of the crisis. His opinion is shared by the chairman of the Chamber of Commerce, Phidias K. Pilides and its Secretary General, Marios Tsiakkis. They emphasise the importance of innovation in medicine, technology and education. In some sectors, such as construction and retail, the recovery is relatively slow. Shipping and tourism, however, are powerful engines for the economy. Tourism is experiencing an unprecedented growth, with 20% more visitors this year. The sector seems to benefit from the unrest in neighbouring countries, such as Egypt and Turkey.

Although the clouds over the economy seem to be drifting off, it will still be a while before we'll see the bright blue sky again, so typical for Cyprus. Future economic growth also depends on developments in the eurozone and the situation in the region. There is uncertainty about the Brexit. According to Mr. Pilides Cyprus is among the top four countries that will feel the impact of a British withdrawal from the EU, though the consequences are not yet predictable. A devaluation of the British pound, as a result of the Brexit can negatively effect tourism and will be bad for the exports. By contrast, the imports from the UK will become cheaper. Dr. Charalambous believes that the effects of a Brexit will largely depend on how Europe will cope with it and if it can maintain confidence in the euro. For Cyprus it is of prime importance to focus on keeping the budget balanced for the time being, which forces the government to set priorities.

"We are trying to do more with less," says Dr. Marina Solomidou-Ieronymidou, director of the Department of Antiquities. As a result of the crisis the department, essential in preserving the Cypriot cultural heritage, also had to deal with significant cutbacks in expenditure. However that was no reason to sit by and do nothing. The department undertakes numerous activities, despite an inevitable reduction in the number of staff. "Every Mediterranean country has sun, sea and beaches, but it distinguishes itself as unique by its culture," she argues. Digitalising the archives has priority. This is especially important to intensify the fight against illicit trafficking of archaeological finds. Not only a lot of steeling and looting went on during the Turkish invasion and subsequent occupation of the North, but it also takes place in neighbouring countries, due to war and violence. In fighting illicit trafficking Cyprus cooperates with many countries in and outside the EU.

Another important activity of the department is to facilitate access to museums and sites for people with disabilities. Information materials are also made available in braille and in large print for the visually impaired. The information on monuments and archaeological sites is available in braille too. In Kourion and Paphos golf cars were purchased for visitors who have difficulties in walking. Guides are specially trained to show people with disabilities around. Furthermore, the department is working on new exhibitions, like in the near future at Amathus on the occasion of the fortieth anniversary of the French Archaeological School. Publications appear in more languages than Greek and English, and with EU support management plans are drawn up for areas which are on the World Heritage List of UNESCO, as Chirokitia. The department aims to promote understanding of its work among the general public, so it will no longer be seen as a 'hostile' organisation that keeps an awkward finger in the pie in housing construction and infrastructural projects. Through a Technical Committee for cooperation in the preservation of the cultural heritage, it works together with the Turkish Cypriots to secure as much as possible the conservation of antiques in the occupied territory, though this is yet limited to unmovable property and monuments. Of course, the department is also involved in preserving recent finds, including Roman mosaics, almost certainly part of a bathhouse, one found during sewer work in Larnaka the other in Akaki.

That heritage conservation is not only of scientific interest, but also of economic, for example because it attracts tourists, goes without saying. Cyprus appears well on way to recovery from the consequences of the crisis. However, one difficulty still remains: the question how to solve the problem of the tragic division of the island.