Half past ten on a Saturday morning. I'm on my way to the mill on the Noordendijk to fetch flour. It's cloudy and the streets are wet, but it doesn't rain. Very soon it may. The trees on the Groenedijk and those in nearby Merwesteijnpark are changing colour and dropping their leaves. Autumn has inevitably come. There's hardly anyone on the streets, it looks like Dordrecht was hastely evacuated apart from one or two lost souls. Quite a contrast with yesterday when we were still clinging to the late summer, outdoors at the Villa Augustus, watching the gardeners quietly going about their work.

I cycle past my old school on the Groenedijk. It is surrounded by scaffolding and wrapped in blue rags. It looks like some restoration is on its way. It's quite a wonder the building is still there. A few hundred yards further down the fairly new building of the technical college has completely disappeared. New houses are being built in its place. Small dwellings looking rather dull. I remember the old building which still bore marks from the war, large red crosses that indicated its use as a temporary hospital. It was right across the road from my primary school in the Bankastraat, the future some of my classmates were looking forward to. You had to finish grammarschool to be admitted. My father had a modest position as a civil servant which meant I was sent to the secondary modern. No questions asked. It meant a long road towards university: after the secondary modern (mulo in Holland) two years havo (a kind of minor A-level course), then teacher training college and finally a bachelors and a masters in history from Utrecht University, after which I took a course in American studies at the University of Minnesota. Going there proved to be the most important decision I ever made because it was in Minneapolis I got to know Stella. 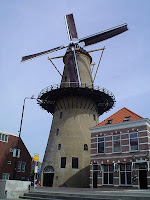 Though there is hardly any wind the mill is working slowly in a proud way, a silent but powerful monument. The last of the scores of windmills on the Dordrecht town walls, painted by artists like Albert Cuyp and Van Goyen. They determined the skyline which is now dominated and ruined by highrise buildings on the river banks both at Zwijndrecht and on this side. To reach the mill I have to lift my bike over a concrete ridge which reminds one that the Noordendijk is the main dike protecting the island from both river and sea. When the moment is there this bit of concrete will decide between disaster or salvation.

I lock my bike, a sensible habit even though there is no one to be seen, and enter the mill. There are just one or two customers in the shop inside. Ik buy flour, sunflower seed and stroopwafels. These are for my Greek family that dote on them. They are the main reason for my luggage to be uncomfortably heavy every time I fly to Salonica. While I strap my shopping bag to the bike I think of my fiftieth birthday which we celebrated in the mill in 2001 and particularly of the people present that have died meanwhile. Before I left the house I heard someone on the radio saying we were all becoming older and older and that therefore we shouldn't retire at 65. I don't believe a word of it. He may have been talking about my parents' generation, but when I look at mine and count on my fingers the many friends and relatives that died young, I need at least a second pair of hands. While I cycle back towards home it begins to rain softly. It's one of the rare moments that my mood seems in perfect harmony with the weather.

We were to come at around two in the afternoon, L. had said. He's sitting in the leather armchair he spends most of his days in of late. What's left of his hair is trailing around his head, his beard has thinned. His hollow cheeks have lost colour, look almost waxen. Behind him the impressive bookcase covering almost all of the wall of the eighteenth century drawing room. When the highest shelves were gradually filling, L. ordered a special stepladder from the same carpenter that built the bookcase. The ceiling is still original and in the care of the Dutch National Trust. L. hates that. Any whitewash needs the approval of an inspector, before and after. That's why the ceiling has slowly turned brownish over the years. For a long time L. was a happy smoker, but two years ago he suddenly gave it up. At first he asked his GP for pills to help him get over it, but when the doctor refused he decided he'd do without and never touched a fag anymore. He made it look an easy thing to do. L. sometimes has a strong mind. Sometimes.

There are thirteen of us. L., his brother and sister and ten friends. To give ourselves an air we chat about the weather. We tell L. that is has been snowing and that there is an icy wind. After that we talk about the Complete Works of Karel van het Reve, of which L. ordered me to buy him volume two just a week ago. L. asks for tea. It's made in the mucky kitchen. Months ago L. ordered his cleaning woman out from fear of losing control and from wanting to check everything that goes on around him. He says we're free to poor ourselves a glass of wine or a beer if we want. He asks for chocolate with his tea.

I imagine L. as I got to know him, forty-six years ago. We were together in class 3A2. Including mathematics. We weren't very good at it, but L. just a little better than me. That's why he is better at playing chess. He was better in footbal too, but I was less shy with the girls. L. remained single. We used to write poems in the school magazine. L. was always coing up with ideas to write about. If he had carried them out he would have published seven books too, like me, or maybe more, but L. didn't always have a strong mind.

The GP is quarter of an hour late, entering without greeting and without an apology. L. looks slightly vexed. He slowly rises and embraces each of us. He follows the doctor and his brother and sister to the bedroom. In the doorway he turns around, lifts a hand and says: 'Well, chow!' Chow, a word I never heard him use before. After fifteen minutes we are allowed in to see. L. lies on the bed, motionless, as relaxed as he wasn't for months. 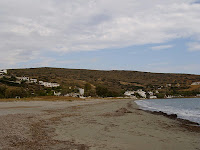 I'm overlooking the bay from which according to mythology Achilles left to join the Trojan War. I read about another war, about the battle for Berlin in 1945. The advancing Russians were shelling the enemy just as much as themselves, it seems. I think of private Pereverzev, who died of his wounds on the day of victory. It wouldn't have worried Stalin a bit. Stalin, the pockmarked creep who is three handshakes distant from me. Russian propaganda turned Berlin into the most important achievement ever of the Red Army, like Homer turned the Trojan War into mythical magnitude.

It is unknown whether private Pereverzev was wounded by friendly fire. Neither do we know if he added lustre to his march on Berlin by indiscriminately raping German women and girls, like so many of his colleagues. We know how Achilles met his end. At least those who are believers.

The sun casts evening shadows on the gardens. There's not a breath of wind. It would be almost tranquil but for the occasional motorbike with its faulty exhaust. I am in a country which still has a communist party believing in Stalin, but the bay murmurs, like in the days of Achilles.

Sammy Balistreri sends word that on December 15 Costa d' Oro will celebrate its fortieth anniversary. I have no idea what I did on that day forty years ago as my diary only begins in August 1975. Reading perhaps. I was in my second year at the Dordrecht teacher training college. I was still decently living at home with my parents. A weekend trip to Paris with friends was about the biggest adventure we could think of. It was after such an adventure, in the spring of 1973, that we got to know the Italian. That was what we named Costa d' Oro and although later on some more Italian restaurants opened in Dordrecht, we still call it the Italian. I remember us being surprised and delighted by the pizza. They weren't a cartwheel's size, like in most other Italian restaurants, but they were well filled and done according to a unique recipe which is still a well preserved family secret of the Balisteri's.

Once my wife Stella and I decided on a top-ten of the best pizza. We never got beyond number three. Those of Costa d' Oro are well on top, followed at some distance by those of Pizza Roma in Perevou Street, Salonica. Number three are the pizza of a restaurant in Pefkohori in Greece of which I can't remember the name. Now and again, when Stella was still alive, we used to travel down to Greece from Holland by car through Italy. Italy is a place for excellent food, except for pizza. True enough it's a matter of taste, but whenever I tried a pizza in Italy, whether in Lodi, Ancona, Verona, Trento or Garda, and even once in Firenze, I always thought 'if this was Voorstraat 444 in Dordrecht it would taste much, much better.' Stella always agreed, even if she was much more scrupulous than I.

After that first visit we kept returning until this very day. My friends Peter, Lupius, Herbert, Thijs and myself had more than one reason for eating out at the Italian in the early days. We were all more or less secretly in love with Rosa, the eldest daughter. Her dad wasn't to know and I wonder whether she herself ever got to find out. Mister Balistreri was an excellent cook but he could be rather strict. If you grew somewhat noisy after drinking a little too much Sicilian wine he'd come up to you with a biting remark that awed you into silence. Of course Costa d' Oro was the first restaurant in Dordrecht where I took Stella when she came over from Greece to meet my parents.

Stella, Mr. Balistreri, Peter and Lupius have all died by now and all of them much too young. Sometimes when eating at the Italian I feel a little melancholic. Those golden years when we were all out there enjoying ourselves will never return. Happily Costa d' Oro has always remained warm and welcoming. Its pizza remain in full force at the head of our list.