Cyprus: the state of affairs (2) 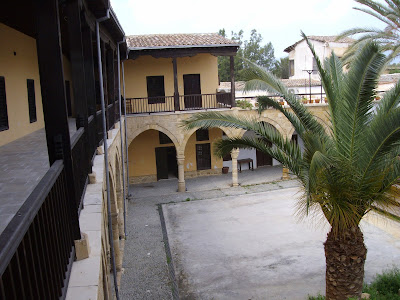 When in Nicosia, I like to take a walk through Agios Kassianos, a picturesque neighbourhood on both sides of the Green Line, in the east of the historic centre. After the Turkish invasion (1974) it was largely abandoned. Many houses fell into disrepair. After the turn of the century things gradually changed, although the population is still only about a quarter of that before 1974. The Archaeological Service restored a traditional mansion in Axiotheastreet, where the University of Cyprus established its Cultural Centre. When recently in Cyprus, I visited a rebetica concert in the framework of the annual cultural festival, in its characteristic courtyard. The building alone is worth a visit. Private houses too were restored, even though they are sometimes literally bordering on the Green Line. In Axiotheastreet, for example, which near the Cultural Centre is closed off by a barricade of old oil barrels, corrugated iron and barbed wire. Behind it we see the sad decline of buildings that have been left abandoned for forty-two years. It sometimes gives me a rather uncomfortable feeling during my wanderings. 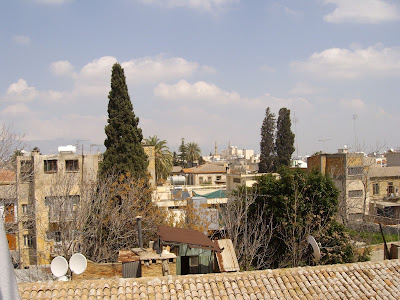 Agios Kassianos, which was called Kafesli in the past, is named after its church, built in the nineteenth century. Close by we find the church of Chrysaliniotissa, the oldest and most important Orthodox place of worship in the city. The main street is Ermou, before the Turkish invasion the Kalverstraat of Nicosia [the Kalverstraat is the main shopping street of Amsterdam - KK]. Now it has the tranquility of a back street. Soon, you'll hit the Green Line, which cuts through Ermou and behind which the minarets the Selimiye Mosque in the occupied part of the city are visible. Formerly a Gothic church known as Agia Sophia built by the Lusignans (1192-1489). As the birds fly two hundred meters, but reachable on foot through the checkpoint on Ledrastreet in about three quarters of an hour.

Centre of Visual Arts and Research

In the Ermou quite a few buildings have been restored. For example the Centre of Visual Arts and Research, containing a museum and research library. It opened its doors to the public in 2014 and is housed in a former Ottoman inn, which was converted into a flour mill in 1953. When the mill closed the building fell into disrepair until it was restored by the Kostas and Rita Severis Foundation, which aims, according to Dr. Rita Severis, the general manager, 'to promote the peaceful coexistence of peoples through the study of the multicultural heritage of Cyprus.' The board of the foundation therefore has both Greek and Turkish Cypriots as members. The focus of the museum is on the 18th to 20th centuries. It possesses more than a thousand paintings, prints and drawings from local and international artists. The collection also contains a large number of items from the personal lives of important historical figures such as the uniform of the first British governor, Sir Garnet Wolseley, and the completely reconstructed office of former president Glafcos Clerides (1919-2013), which is rented regularly to companies or organisations as a meeting room. Of great importance too is the library, which contains a few thousand books and a collection of documents available for scientific research. 'Our centre is primarily a bi-communal project,' Dr. Severis emphasises. A major project is SHARE (Sharing History, Art, Research and Education), which includes educational activities aimed at young people in the whole of Cyprus.The Centre also organises such events as concerts, film screenings and lectures. However, if its ideal, finding a solution to the division of Cyprus, will be achieved in the foreseeable future, is still questionable.

I put this question to Dr. Georgios Kazamias, professor of history at the University of Cyprus. According to him, there still are quite a few obstacles on the way to a solution, which would include the creation of a federated Cyprus with two states. First there is Turkey. Nothing happens in northern Cyprus beyond the control of Ankara and it seems at the moment that a solution is not very urgent to Turkey, as a Turkish EU membership has drifted far out of sight. Perhaps the desire to share in the promising gas reserves under continental shelf of Cyprus could have a positive effect, but given the low energy prices he has serious doubts about this. According to him, an irrational factor like the strong Turkish nationalism is a major obstacle, but there are also practical problems. For instance the question in what way the displaced people will be financially compensated, and more importantly: who will pay for it? The government hopes for donations from friendly countries, but whether these will materialise is still uncertain.

President of the Chamber of Commerce, Phidias K. Pilides, believes that a solution will be beneficial for the economy in the long run, although initially there will be costs. There will be possibilities for joint ventures with the Turkish Cypriots, who in particular will benefit, because their economy is still not very well developed. Shipping will benefit by the opening of Turkish ports to ships sailing under the Cypriot flag. At the moment they are still banned from entering these. The Turkish market will be opened to Cypriot companies and construction will likely attract a lot of work because of much reconstruction work waiting, especially in the UN buffer zone and in Famagusta, where the tourist district of Varosha, abandoned since 1974 and sealed off from the outside world, must be rebuilt. He also sees new opportunities for tourism, especially maritime, which will further develop. Finally, the exploitation of gas deposits under the continental shelf will be easier. The Chamber of Commerce therefore hopes that both parties will eventually come to a solution.

An adviser to the president, who asked to remain anonymous because he speaks in his own name, however, does not sound optimistic. It's often mentioned in the media that the time to reach an agreement is more favourable than ever, but that idea is primarily based on the fact that President Anastasiades and the leader of the Turkish Cypriots, Mustafa Akinci, are personally getting on well together. There still remain some formidable obstacles to an agreement. For example the Turkish Cypriot demand for the presidency to rotate every few years between the president (elected by the Greek Cypriots, 80% of the population) and vice president (elected by the Turkish Cypriots, 18% of population). This is not in line with democracy. Also, it does not appear that the Turkish Cypriots and especially the Turks, will accept the Greek Cypriot demand for the abolition of the Treaty of Guarantee. This treaty implies that Turkey, Britain and Greece guarantee the independence and constitutional order in Cyprus. With this agreement in hand, the Turks justified their invasion in 1974. Thirdly, both sides are still far from an agreement on the territories of the two states. The Greek Cypriots claim in any case the return of Morfou and surroundings and Famagusta.

On the last night of my stay I return Agios Kassianos. In the Ermou I discover a restaurant with a garden overlooking the Green Line. The garden is romantically lit, but in the buffer zone it is pitch dark. Two cats are quarreling. Their shrieks echoing against the houses on the other side of the demarcation line. Once the argument is over, a peaceful silence returns. I wonder when this charming part of Nicosia will again be a prosperous, reunified residential area. The latest rounds of negotiations under the auspices of the United Nations, in September and November, and the beginning of January, the last of which took place at the Swiss town of Mont Pelerin, have not yet resulted in agreement.