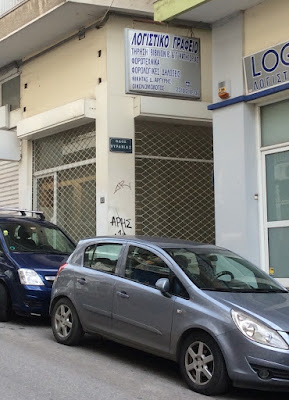 On the way from my temporarily abode in Salonica to the lower town I descend Agia Sophia street. I notice the name of an alleyway I pass: Urania street. Urania, the Muse of Astronomy. It makes me think of Charles Dickens who founded a home for 'fallen girls,' named Urania Cottage, together with the fabulously rich miss Coutts. The aim was to rehabilitate these girls by teaching them the necessary domestic skills after which they were to be shipped off to Australia or Canada to get married and live long and happily ever after.

Dickens never visited Greece, never mind Salonica, in the nineteenth century the competitor of Smyrna and Alexandria for the position of second city in the Ottoman Empire. There probably aren't any 'fallen girls' to be found on Urania street, though you will in the seedy side of town, between the port and the railway station. By the way, there aren't many stars to be seen either at night between the towering flats of narrow Urania street.

My temporary abode is in the former Turkish quarter. Just above the street where the great fire of 1917 began. It burned for thirty-six hours during which three quarters of the city was destroyed. It's a picturesque neighbourhood with quite some remains from the days that mobile telephones and the internet were still eccentric dreams of a whacko Gyro Gearloose. A girl obsessively staring at her smartphone nearly bumps into me. She gives me an angry look, as I am to blame of course.

The fire drastically changed the features of the city. History drove out the Turks in 1923 and twenty years later almost all the Jews, who constituted the largest community in Salonica by the end of the nineteenth century, the reason why it was sometimes named the Jerusalem of the West. It's impossible to predict what the internet will finally bring about, but at least the word γουγλάρω found a place in the Greek language.