She would play the piano
whenever someone hinted
at national anthems.

For years she practised the French
the Dutch, the Greek, hesitantly the Russian
though they never seemed to differ much.

It was Bill, she said, Bill taught her
and sent her the musical notes from beyond
evening after evening or after months of silence.

It was then she tried her own songs
national anthems in their own way
melodies from countries still to be discovered.

In times of happy communication
Bill being back on the air

she would predict the future
for a few pennies more.

Where the country ends 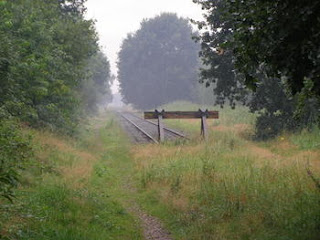 The guest room of the estate in Drenthe where I am staying looks upon a green world surrounded by high hedges which makes you think of England. You'd love to enter it as naked as Adam and Eve, but it's fifteen degrees so for the time being I'm wearing a pullover. A plane is drawing a white line across the sky. It comes out of Germany, right round the corner. Just the peat bog separates us from the border. The peat bog. A desolate plain without trees, where sex killers prey on girls cycling through the loneliness. The hair-raising name of Tweede Exloërmond is still on everyone's mind.

I try to find Radio 1 on the small set in the room, but all I receive is a local pirate blaring out rubbish. The voices of the hosts, two guys who obviously very much love their boring witticisms, sound like those of men who stayed somewhat too long in the local. While I turn off the device my eye catches a field mouse running across the patio. An act of bravery considering the many birds of prey around.

I arrived at Emmen, four miles away, by train at the beginning of the evening. Emmen means the end of the railway, almost the end of the Netherlands. Every half hour a train from Zwolle will take you to this beginning of nowhere. They used to be real Third World these trains, even in the first class you got the idea that any moment a farmer would guide his goat into the compartment or a woman would enter carrying a score of chickens by the legs. They have new trains now and modern farmers usually endanger the roads in pickup trucks, but still the line goes dead at Emmen. The guard who checked my ticked seemed a friendly man but hard to understand. At the station I was met by a driver from the estate. There's no public transport in that direction. Only private carriages. Today the carriage was called Peugeot.

That evening we drank home made cider. On the patio surrounded by pots full of herbs. It was very quiet, though occasionally we heard one of the sheep, hired from a farmer friend to mow the lawns. I was told that the local pub went bankrupt, that such and such killed themselves by drunken driving and that my friend has entered local politics as becomes a village squire. People are worried about a possible pyromaniac, maybe a member of the volunteer fire brigade. As the evening proceeded preparations were made for supper. Far away I saw a lonely girl on a bike. I prayed she wasn't heading for Tweede Exloërmond.

Out of all proportion

Former mayor of Thessaloníki, Vassilis Papayorgopoulos has received a life sentence from a court of appeal in Greece's second largest city. Was he a junta leader? Was he at the head of a terrorist organization? Is he a serial murderer? None of it. He was sentenced because of the embezzlement of eighteen million euro's from the municipality. Two key officials were also found guilty, but they received considerably lower prison terms. Papayorgopoulos denies all charges and declares he's the victim of a political trial. Stealing eighteen million euro's from public funds is not a petty crime, but that it should be punished with a life sentence is absurd and out of all proportion. The sentence could give one the idea that someone had to be victimized in order to somewhat stem the growing anger amongst a people facing another round of wages and pension cuts. In that case the former mayor of Thessaloníki and former Minister of Sports who fairly recently retired from politics would be a useful pawn. I don't know whether it's the case, but this excessive punishment does raise questions.

I've known Thessaloníki for more than twenty five years now, but only recently I discovered a new footpath for my walks. Almost on my doorstep. It runs along the stream just fifty yards further down the hill and one can follow it all the way to the end of Charilaou, a walk that takes about one hour and a half. It's a green trail through the outskirts of the city on which you are not hampered by lethal drivers in cars or on motorbikes. When I walk down to the city centre I have to be continuously on guard because of traffic rushing out of the side streets. Crossing over when a pedestrian light is green is taking quite a risk because drivers coming round the corner hardly ever bother about something poor as a fellow human on foot and there is always the possibility of the proverbial idiot driving through red because he or she is on a mobile telephone. Taking a bus is not very safe either. A few days ago another driver of a packed bus of OASTH, the company in charge of public transport, was happily chatting in his mobile phone while driving on busy Egnatia Street. If I want a real quiet walk I go to Seïch-Sou forest, but following this path is quite a pleasure too and there's always a place nearby for your morning coffee.

Morning coffee at an outdoor cafe is something Vassilis Papayorgopoulos will have to miss for the time being. I hope he will take his case to the highest court in Greece and I hope he will be cleared of all charges. I've met him once or twice, I believe in his innocence and I love to be proved right. I've always doubted the purpose of sending people to prison. No one ever came out a better person, but that's another subject than today's. Should he be proved guilty after all the sentence ought be humane and proportional, not as barbaric as the one he received now.