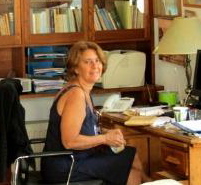 Once I had roasted pigeon. On Cyprus in the autumn of 2005 at the home of Niki Marangou, the poetess. She was one of the people that helped us tremendously when Stella and I were preparing our anthology of Cypriot literature, Wij wonen in een taal (We are living in a language) which was published in 2004. We went to Cyprus to deliver the book. Niki invited us for dinner in her beautiful garden in Agios Dometios. In that garden we saw a litter of pups that delighted us. We were going to have a dog like that once we would settle in Greece.

Two years after Stella died I travelled to Cyprus again. This time for a history conference. Almost a soon as I arrived at the hotel Niki sent me an invitation. I took her Stella's posthumous poetry collection. Again we were sitting in that beautiful garden, Niki, the writer Nikos Nikolaou-Hatzimichaïl, a good friend, and me. After a sun-drenched afternoon we left. Niki gave me a handmade booklet with some of her poems. I still cherish it. We would soon meet again, either on Cyprus or in Thessaloniki. Niki came to Thessaloniki once or twice when I happened to be in Holland, but we remained in touch. Nikos sent me his wonderful poetry collection Διθαλάσσου. Niki travelled through Turkey, India and the Near East and sent me colourful descriptions of her wanderings. I hoped she would publish them in a book. I also hoped she would once be invited by Poetry International, but up to now the organisers have always scrupulously ignored my suggestions.

On Friday morning I looked at Facebook. Someone had shared a link with the newspaper To Vima. I saw Niki's photograph and thought 'another literary award.' Then I read the Greek word for perished. My hart stopped beating for a second. While visiting Egypt she died in a car accident somewhere near Faiyum. The Egyptian police has still not given any statement on how the accident happened. The Cypriot foreign secretary spoke of a great loss for Cyprus. Nor only for Cyprus but for all of the Greek speaking world and for European literature. Besides a much awarded writer she also was a gifted visual artist and dramatist. I think of that beautiful garden in Agios Dometios and of the immense void she leaves behind.